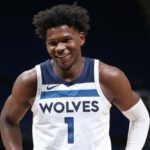 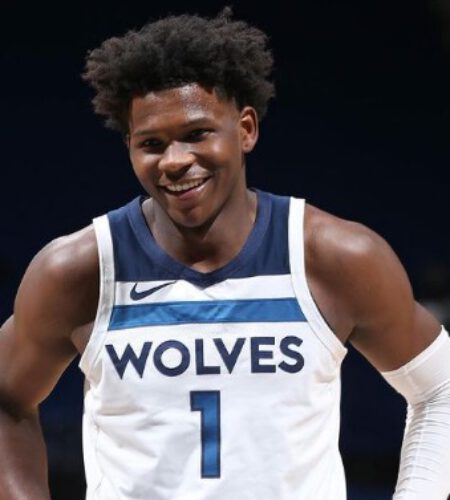 Anthony DeVante Edwards (born August 5, 2001) is an American professional basketball player for the Minnesota Timberwolves of the National Basketball Association (NBA).
A shooting guard, he played college basketball for the Georgia Bulldogs.
Edwards finished his high school career at Holy Spirit Preparatory School in his hometown of Atlanta, where he was rated a consensus five-star recruit and one of the best players in the 2019 class by major recruiting services.
As a senior, he earned McDonald's All-American and USA Today All-USA first team honors.
He committed to play college basketball for Georgia, becoming the most heralded recruit to do so, and was named SEC Freshman of the Year after his freshman season with the team. He was selected with the first overall pick by the Minnesota Timberwolves in the 2020 NBA Draft.
Edwards' mother, Yvette, and grandmother, Shirley, both died from cancer during an eight-month span in 2015, when he was in eighth grade. He has worn the No. 5 basketball jersey since high school to honor them, as they both died on the fifth day of the month. In turn, Edwards was raised by his sister, Antoinette, and brother, Antoine, who share legal custody over him. In high school, Edwards frequently worked as an instructor at a number of youth camps. He intended to major in marketing while attending the University of Georgia.