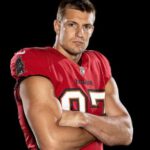 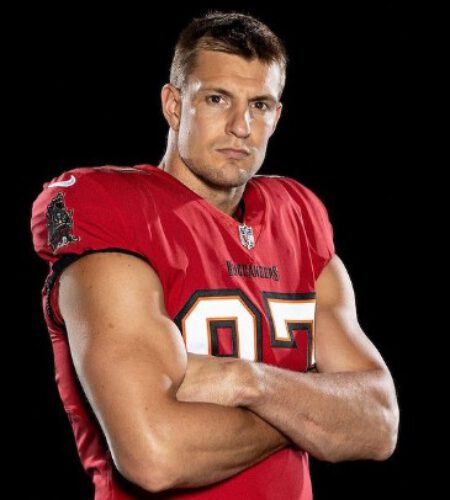 Robert James Gronkowski (born May 14, 1989), nicknamed "Gronk", is an American football tight end for the Tampa Bay Buccaneers of the National Football League (NFL).
He previously played nine seasons for the New England Patriots.
He is a four-time Super Bowl champion (XLIX, LI, LIII, LV), a five-time Pro Bowl selection, a four-time First Team All-Pro selection, and was selected in the NFL 2010s All-Decade Team and NFL 100th Anniversary All-Time Team.
During his football career, Gronkowski has not spent any of the money he has made from his NFL contracts and strictly lived off the earnings from his business ventures, endorsement deals and appearance fees.
He is the second youngest son of Gordon Gronkowski and Diane Walters, and is of Polish descent through his father.
His father is a former college football guard for Syracuse University from 1977 to 1981 and later founded a high-end fitness equipment business.
He is a great-grandson of Ignatius Gronkowski who represented the United States in cycling at the 1924 Summer Olympics in Paris, France, and held five world records in the sport.
Gronkowski’s parents divorced in 2008.
On April 21, 2020, the Patriots, which still held Gronkowski's rights, traded him to the Tampa Bay Buccaneers along with a seventh-round pick in exchange for a compensatory fourth round pick in the 2020 NFL Draft. The trade reunited him with his former Patriots quarterback Brady who signed with the Buccaneers a month prior. Head coach Bruce Arians stated that it was Brady himself who was adamant for the team to trade for Gronkowski.