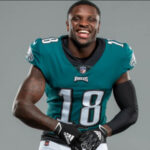 Jalen Armand Reagor (born January 2, 1999) is an American football wide receiver for the Philadelphia Eagles of the National Football League (NFL).
He played college football at TCU and was drafted by the Eagles in the first round of the 2020 NFL Draft.
Reagor was selected with the 21st pick in the 2020 NFL draft by the Philadelphia Eagles, becoming the highest-drafted wide receiver to come from TCU since former All-American Josh Doctson in 2016.
On the football field, Reagor produced back to back 1,000-yard receiving seasons for Waxahachie head coach and former NFL quarterback Jon Kitna and was selected to play in the 2017 Under Armour All-America Game. His track & field career culminated with a gold medal in the long jump at the 2017 Texas High School state meet.