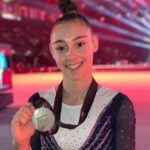 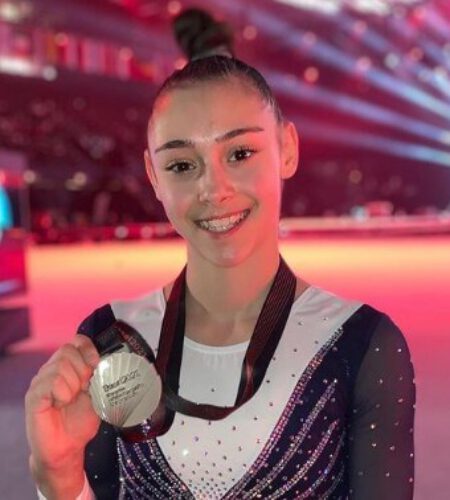 Jennifer Gadirova (born 3 October 2004) is an Irish-born British artistic gymnast.
She represented Great Britain at the 2020 Summer Olympics and won a bronze medal in the team event.
She competed at the 2019 Junior World Championships alongside her twin sister, Jessica, where she won a silver medal in the vault final.
In July Gadirova competed at the Sainté Gym Cup where she helped Great Britain win team gold. In September she competed at the 2019 Women’s Artistic Adrian Stan British Teams Championships, finishing second in the junior all-around, after her sister. In November she competed at the Massilia Cup in France, winning gold on vault and silver on floor.
In 2020 Gadirova became a senior. Her senior debut was the American Cup where she placed fourth (due to a fall) behind Morgan Hurd, Kayla DiCello (both from the United States), and Hitomi Hatakeda of Japan. While there she received the highest score on floor exercise (13.700) and vault (14.566), second highest on balance beam (13.933), and tenth highest on uneven bars.
Gadirova and her twin sister Jessica were born in Dublin, Ireland, and are of Azerbaijani background.Their father, Natig Gadirov, is a citizen of Azerbaijan and their mother is Azerbaijani as well. Gadirova was born in Dublin, Ireland while her parents worked there for a few months. As a result she has both Irish and British citizenships. Her paternal grandparents live in Baku: grandmother is a retired paediatrician, and grandfather is a professor in physics and mathematics.Gadirova and her sister began gymnastics at six years old because their mother wanted them to have an outlet for their energy.