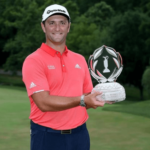 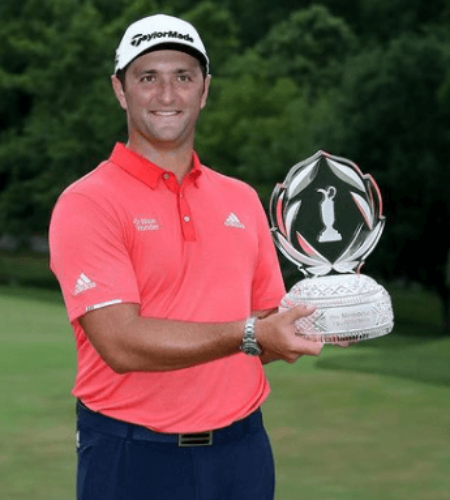 Jon Rahm Rodríguez (born 10 November 1994) is a Spanish professional golfer.
He was the number one golfer in the World Amateur Golf Ranking for a record 60 weeks and later became world number 1 in the Official World Golf Ranking, first achieving that rank after winning the Memorial Tournament in July 2020.
In June 2021, Rahm became the first Spanish golfer to win the U.S. Open.
In 2015, he won the Mark H. McCormack Medal as the leading player in the World Amateur Golf Ranking for which he was qualified for the U.S. Open and Open Championship.
Jon won the Race to Dubai championship and European Tour Golfer of the Year in 2019.
He also won the Sir Henry Cotton Rookie of the Year in 2017.
While he was attending the Arizona State University, Jon had won 11 college golf tournaments. As of June 2021, only Phil Mickelson had won more college golf tournaments in the university’s history (16).
He had won the ‘Ben Hogan Award’ (an annual prize presented by Friends of Golf and the Golf Coaches Association of America, since 1990, to the best college golf player in the United States) in both 2015 and 2016, the first player to win the award twice.
Jon is a supporter of the Basque football team Athletic Club Bilbao and was honored as the club’s special guest in December 2019.
He won 11 college golf tournaments during his college days.
He also won the Ben Hogan Award in 2015 and 2016, which made him the first person ever to win it twice.