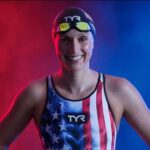 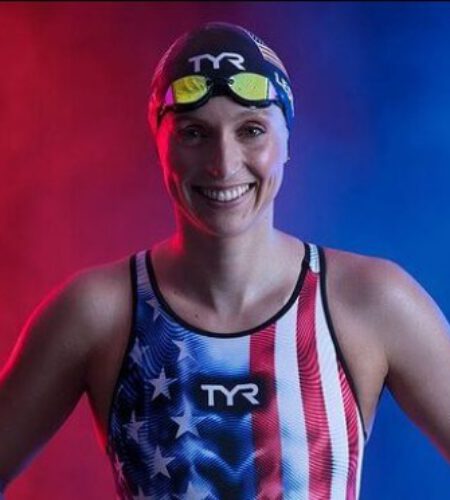 Kathleen Genevieve Ledecky (born March 17, 1997) is an American competitive swimmer.
She has won five Olympic gold medals and 14 world championship gold medals, the most in history for a female swimmer. She is the current world record holder in the women's 400-, 800-, and 1500-meter freestyle (long course).
She also holds the fastest-ever times in the women's 500-, 1000-, and 1650-yard freestyle events.
In her international debut at the 2012 London Olympic Games as a 15-year-old, Ledecky unexpectedly won the gold medal in the women's 800-metre freestyle. Four years later, she left Rio de Janeiro as the most decorated female athlete of the 2016 Olympic Games with four gold medals, one silver medal, and two world records. In total, she has won 31 medals (27 golds, three silvers, and one bronze) in major international competitions, spanning the Summer Olympics, World Championships, and Pan Pacific Championships. During her career, she has broken fourteen world records.
At the 2019 World Aquatics Championships in Gwangju, South Korea, Ledecky battled illness and withdrew from two events before winning her fourth-straight World Championship title in the 800-meter freestyle.
Ledecky made her debut as a professional swimmer on May 16, 2018, at the TYR Pro Swim Series in Indianapolis, Indiana, where she beat her old world record in the 1500-meter freestyle, setting a new world record of 15:20.48. She broke the existing mark by five seconds.
Ledecky signed her first sponsorship deal with TYR Sport, Inc. on June 8, 2018.
In July 2018, at the US National Swimming Championships, Ledecky qualified for the 2018 Pan Pacific Championships by finishing first in the 200-, 400-, and 800-meter freestyle.