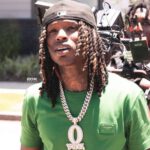 King Von was born on 09-08-1994 in Chicago in the state of Illinois, United States. He was an American Rapper, Singer, Songwriter & Musician who was associated with the record levels like Asian Doll, Only The Family & Empire.
He was in a relationship with an American Rapper, Asian Doll.
On February 21, 2020, Von released "Took Her To The O" which went on to become on his most popular songs. He followed that up with another album, "LeVon James", released on March 6, 2020.
On April 29, 2020, King Von released his single "Grandson for President", which did well in popularity.
On November 6, 2020, Bennett was killed after being shot at an Atlanta nightclub. He was 26 years old.