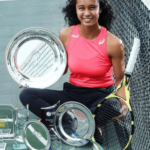 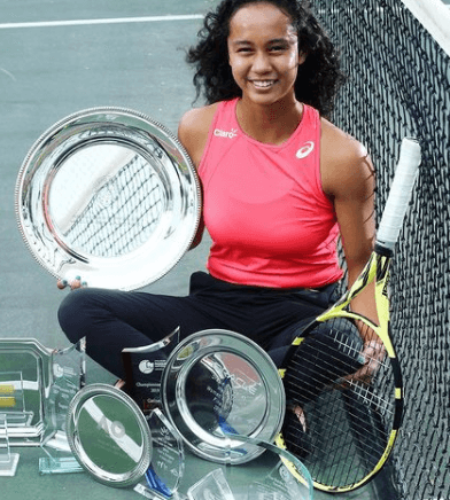 Leylah Annie Fernandez (born September 6, 2002) is a Canadian professional tennis player.
She has a career-high Women's Tennis Association (WTA) ranking of No. 28 in the world. Fernandez won her first WTA title at the 2021 Monterrey Open. As a 19-year-old, she finished runner-up at the 2021 US Open to fellow teenager Emma Raducanu, defeating three top-5 players en route to the final (including defending champion Naomi Osaka).
She ran to hug her father first after defeating Françoise Abanda in the semi-final at the Granby Challenger. This was a breach of tennis etiquettes as you are supposed to shake hands with your opponent first and hence she was given a warning to not repeat such mistakes again.
Her father is a former soccer player and her younger sister Bianca Jolie also plays tennis.
She became only the second Canadian female tennis player to win a Grand Slam Junior title after Eugenie Bouchard.
Fernandez has a career-high WTA singles ranking of No. 126 achieved on 2 March 2020. She also has a career-high WTA doubles ranking of No. 284, achieved on 3 February 2020.