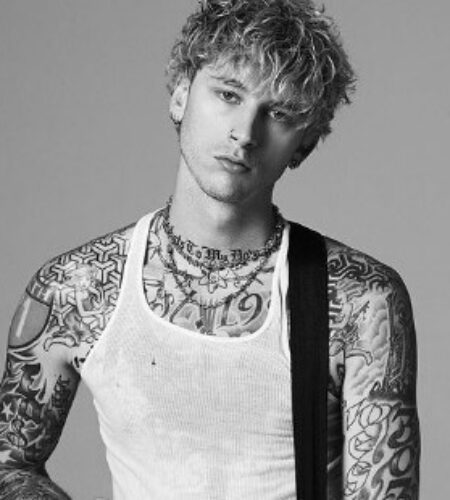 Colson Baker (born April 22, 1990), known professionally as Machine Gun Kelly (MGK), is an American rapper, singer, songwriter, and actor. He is noted for his compositional blending of contemporary and alternative hip hop with rock.

Together with a few friends from Cleveland, Ohio, including Hypeman Slim Gudz and drummer "Rookie", MGK has an ideological movement known as E.S.T. 19XX.
Won 'Woodie of the Year' from mtvU Woodie Awards 2013.
MGK had his start on the popular video sharing site YouTube, where he would share homemade tracks and upload videos of his daily life.
Won 'Breaking Woodie' from mtvU Woodie Awards 2012.
Has a daughter: Casie Colson Baker (b. July 24, 2009) with ex-girlfriend, Emma Cannon.
Alongside Douglas Booth, Daniel Webber, Iwan Rheon, and Pete Davidson, he co-starred as Tommy Lee, Mötley Crüe‘s drummer, in the 2019 biographical comedy-drama film, The Dirt.
He has a reputation for climbing high during his live shows and diving into his audiences. During a concert in Edmonton, he jumped from the roof.
He brought to life the character of Newt, Robin’s cousin and fellow Power dealer who possesses the ability of thermal regulation that allows him to generate fire from his body, in the superhero film, Project Power, in 2020.
In November 2020, he revealed that he was seeking therapy for drug abuse.
In December 2019, Baker began teasing an upcoming project with Travis Barker producing, it was then later revealed that the album would be pop punk. On January 14, 2020, Baker announced the title of the project as Tickets to My Downfall, which is slated for release later in the year.
On January 28, 2020, rap newcomer Capulet was featured on Baker's "Candy" track alongside Trippie Redd, releasing the single on Spotify.