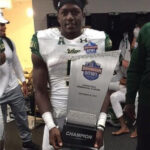 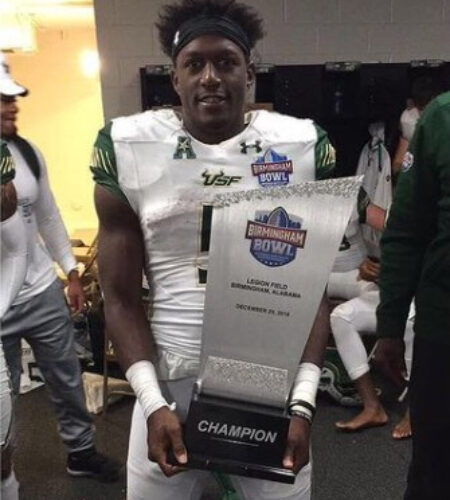 Marlon Devon Mack (born March 7, 1996) is an American football running back for the Indianapolis Colts of the National Football League (NFL).
He played college football at South Florida and was drafted by the Colts in the fourth round of the 2017 NFL draft.
Marlon is an American football running back. He currently plays for the Indianapolis Colts in the NFL. Mack played college football for South Florida and high school football for Booker High School.
Active in the professional football scene since 2017, Marlon was drafted by the Colts in the 4th round of the 2017 NFL draft. He was the 143rd overall pick.
The Indianapolis Colts selected Mack in the fourth round (143rd overall) of the 2017 NFL Draft. Mack became the first running back to be drafted from the University of South Florida and was the 15th running back drafted in 2017. He was the 28th USF player to be selected in the history of the NFL draft.
On May 17, 2017, the Indianapolis Colts signed Mack to a four-year, $2.81 million contract that includes a signing bonus of $419,648.
Throughout training camp, Mack competed to be the primary backup running back against Robert Turbin and Josh Ferguson. Head coach Chuck Pagano named Mack the third running back on the Colts’ depth chart to begin the regular season, behind Frank Gore and Robert Turbin.