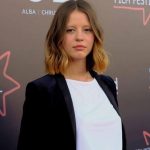 Mia Gypsy Mello da Silva Goth was born October 30, 1993 in Southwark, London, England to a Brazilian mother and a Canadian father.
Her mother is Brazilian, while her father is Canadian, originally from Nova Scotia. Her maternal grandparents are American artist Lee Jaffe and Brazilian actress Maria Gladys.
She divided her time between Brazil and Canada before eventually returning to London at the age of 12.
After she returned to London, she was discovered by the popular modeling agency, Storm Model Management, at the age of 13.
(September 25, 2018) Has filed for divorce from her husband of 23 months Shia LaBeouf.
In 2013, Mia Goth made her first TV show appearance on the crime drama series, The Tunnel.
In 2013, she made her theatrical film debut in the controversial drama movie, Nymphomaniac: Vol. II.
It was announced in April 2022 that she welcomed her first child with Shia LaBeouf; a son; which they named Jean-Paul LaBeouf.
She has citizenship in three countries: The UK, Brazil and Canada.