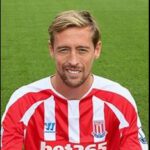 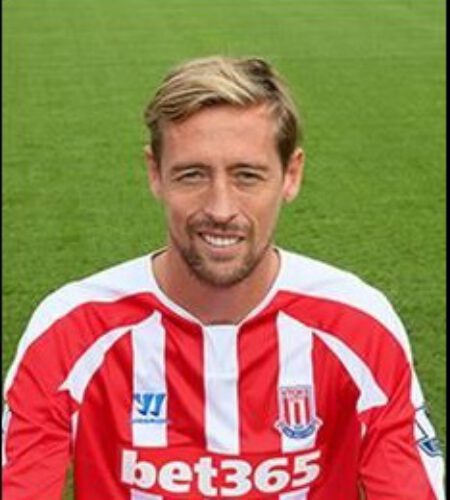 Peter Crouch is an international England team professional footballer. He was born on 30 January 1981 and his birthplace Macclesfield, England.
Crouch has played in the Portsmouth, Tottenham Hotspur, Stoke City club, and England football team.
Usually, his playing position is Striker. In fact, footballer Crouch is an important player of the Stoke City team.
At 6 feet, 7 inches (201 cm), he is one of the tallest people to ever play in the Premier League. Crouch played for Liverpool and England. He was the first player to score 10 goals for England in a single year.
He is known for his famous robotic dance celebration, which he first performed after his goal against Hungary in May 2006.
Footballer Peter James Crouch began his first career with Tottenham Hotspur. In March 2002, he joined Aston Villa for 5 million EUR.
On 2 July 1998, he signed a professional deal with Tottenham Hotspur, later played for their youth team.
He was capped 42 times by the England national team between 2005 and 2010, scoring 22 goals for his country during that time, and appearing at two FIFA World Cup tournaments.
He is one of 29 players to have scored 100 or more Premier League goals, and holds the record for the most headed goals in Premier League history.
He won the FA Cup and the FA Community Shield in 2006, and also won the runner-up medal in the 2007 UEFA Champions League Final.
His fans and teammates have given several nicknames to him. He is often called ‘Crouchy’ and ‘RoboCrouch’ due to his style of celebration after scoring a goal.
Peter was in a long term relationship with model Abbey Clancey. The couple got engaged in July 2009 and got married in June 2011. They have three children together: two sons and a daughter.
Peter faced fine for over speeding in November 2011, and in October 2012, his driving license was suspended for six months.
Peter has penned a book titled ‘Walking Tall- My Story.’