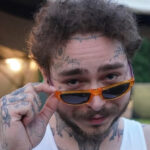 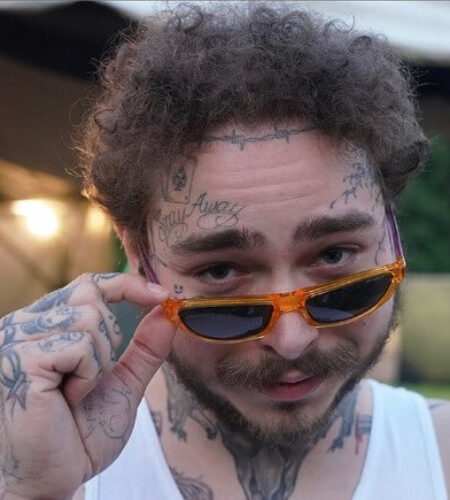 Austin Richard Post (born July 4, 1995), known professionally as Post Malone, is an American rapper, singer, songwriter, record producer, and actor.
He explored his love for music when he was young and eventually took vocal lessons and learned to play the guitar.
In an unfortunate event, his guitar strings broke while he was performing a song during the audition for the band Crown the Empire, and thus he was rejected.
He began his professional music career with a heavy metal band and later transitioned to softer rock as well as hip-hop.
He adopted the moniker “Post Malone” at the age of 14 or 15.
As a teenager, he worked at chicken express, a food chain. He later moved to Los Angeles with his friend to try his luck in rapping.
He started his music journey in 2009 after he started playing the simulation game, Guitar Hero. He claims to have achieved a five-star rating in the expert mode in Guitar Hero 3.
He had written his popular single, White Iverson just two days before he went on to record it.
He was inspired by Justin Bieber to start his tattoo collection which includes a playboy bunny on his left forearm and a face of a lion on the back of his right hand.
During the 2018 American Music Awards, he performed a medley of songs “Psycho” and “Better Now” along with Ty Dolla Sign.
In May 2020, he launched Maison No. 9, his own line of French rosé wine.
In June 2020, he posted an image on his Instagram to reveal some new face tattoos.