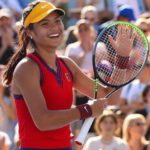 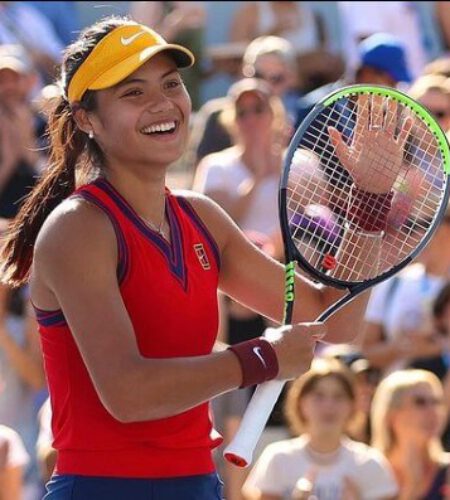 Emma Raducanu (born 13 November 2002) is a British professional tennis player.
She has won three singles titles on the ITF Circuit.
She has a career-high singles ranking of World No. 150 achieved on 23 August 2021.
Prior to her debut performance at the 2021 Wimbledon Championships, her career-high WTA singles ranking was No. 338.
With a wildcard entry to 2021 Wimbledon, her Major debut, she advanced to the fourth round and lifted her ranking to No. 179.
On 23 August 2021, she reached the final of the 125k Oracle Challenger Tournament in Chicago and rose to No. 150 in the rankings.
On her debut at the 2021 US Open, she reached the semifinals, becoming the only qualifier in the Open Era to do so, entering the top 100 for the first time.
Raducanu became the fourth British teenager to make the Round of 16 at Wimbledon in the Open Era and, at 18 years and 239 days old, the youngest.
Both of her parents are from different origins.
She counts Simona Halep and Li Na as idols.
Raducanu hit a career-high junior ranking of No.20 in 2018.
She revealed that she got a chance to play with the former Wimbledon champion named Marketa Vondrousova for an hour before the tournament.
In an interview, she revealed a rule of her life which says that ”she does not take anything for granted”