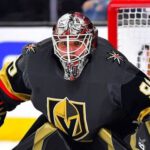 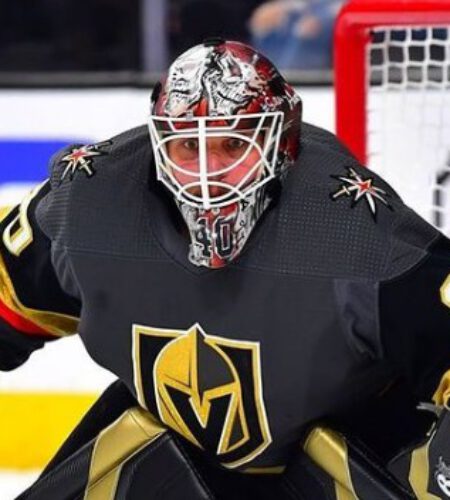 Robin Lehner (born 24 July 1991) is a Swedish professional ice hockey goaltender for the Vegas Golden Knights of the National Hockey League (NHL).
He has previously also played in the NHL with the Ottawa Senators, Buffalo Sabres, New York Islanders, and Chicago Blackhawks.
Lehner was selected in the second round (46th overall) of the 2009 NHL Entry Draft by the Senators.
He was the recipient of the Jack A. Butterfield Trophy as MVP of the 2011 Calder Cup playoffs with the champion Binghamton Senators, Ottawa's American Hockey League (AHL) affiliate.
In 2019, he won the NHL's William M. Jennings Trophy for fewest goals allowed, and Bill Masterton Memorial Trophy for perseverance, sportsmanship, and dedication to the sport of hockey, while also being named a finalist for the Vezina Trophy as the league's most outstanding goaltender.
On 6 April 2019, Lehner posted a 3–0 shutout over the Washington Capitals securing the William M. Jennings Trophy, which he shared with teammate Thomas Greiss. On 11 April, he recorded his first playoff win against the Pittsburgh Penguins.
On 22 June 2018, the Sabres announced they would not tender Lehner a contract offer and would allow him to become an unrestricted free agent when his contract expired on 1 July.
Lehner and his wife, Donya (née Naini) have two children: a son and a daughter. Donya is of Persian descent. Politically, Lehner supported Donald Trump during the 2016 presidential election.
On 26 June 2015, Lehner and David Legwand were traded to the Buffalo Sabres in exchange for Buffalo's 21st overall pick in the 2015 NHL Entry Draft (used to select Colin White).