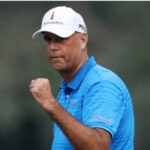 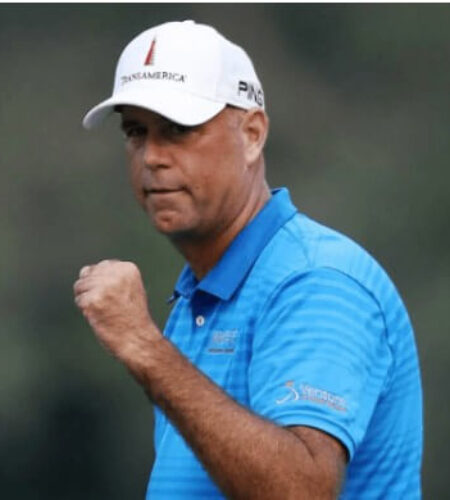 Stewart Ernest Cink (born May 21, 1973) is an American professional golfer who plays on the PGA Tour.
He won the 2009 Open Championship, defeating Tom Watson in a four-hole aggregate playoff.
He spent over 40 weeks in the top 10 of the Official World Golf Ranking from 2004 to 2009, reaching a career best ranking of 5th in 2008
Cink was born in Huntsville, Alabama, and grew up in nearby Florence, where he attended Bradshaw High School. After completing high school in 1991, he graduated from Georgia Tech in Atlanta in 1995 with a degree in Management, where he played golf for the Yellow Jackets; he turned professional in 1995.
On July 19, 2009, Cink won his first major title at the 138th Open Championship at Turnberry, Scotland, defeating 59-year-old, five-time champion Tom Watson by six strokes in a four-hole playoff. Cink had birdied the 72nd hole while Watson bogeyed, which forced the playoff.
Cink has struggled on the PGA Tour since winning the 2009 Open Championship. He is playing the 2016–17 season using a career money list exemption.
QF, R16, R32, R64 = Round in which player lost in match play "T" = tied NT = No Tournament Note that the HSBC Champions did not become a WGC event until 2009.