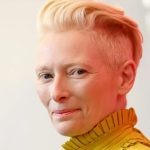 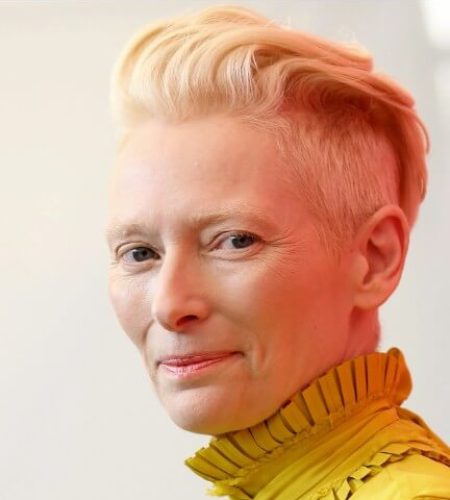 Katherine Matilda Swinton (born 5 November 1960) is a British actress. Known for her roles in independent films and blockbusters, she has received various accolades, including an Academy Award and a British Academy Film Award, in addition to nominations for three Golden Globe Awards and five Screen Actors Guild Awards. In 2020, The New York Times ranked her as one of the greatest actors of the 21st century
Tilda went to three schools, namely Queen’s Gate School in London, the West Heath Girls’ School, and also Fettes College.
In 1983, Swinton graduated in Social and Political Sciences from New Hall which is now known as Murray Edwards College, a part of the University of Cambridge.
Swinton made her debut TV appearance in the miniseries Zastrozzi: A Romance in 1986 where she played ‘Julia’.
Swinton played the role of ‘Sally’ in her debut film Egomania – Insel ohne Hoffnung in 1986.
Lives 16 miles east of Inverness in Nairn, Scotland, with her partner Sandro Kopp (an artist of some note) and her children, Xavier and Honor Swinton Byrne, whose father is Scottish painter and playwright John Byrne.
Daughter of Major-General Sir John Swinton of Clan Swinton, whose ancestral home has been within the family since the 9th century.
Tilda Swinton Best known for: Playing Mason in Snowpiercer (2013), as Eve in Only Lovers Left Alive (2013), as Madame Celine Villeneuve Desgoffe-und-Taxis in The Grand Budapest Hotel (2014), as Eva Khatchadourian in We Need to Talk About Kevin (2011), as Jadis, the White Witch in The Chronicles of Narnia (2005, 2008, 2010) film series.