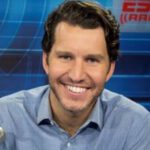 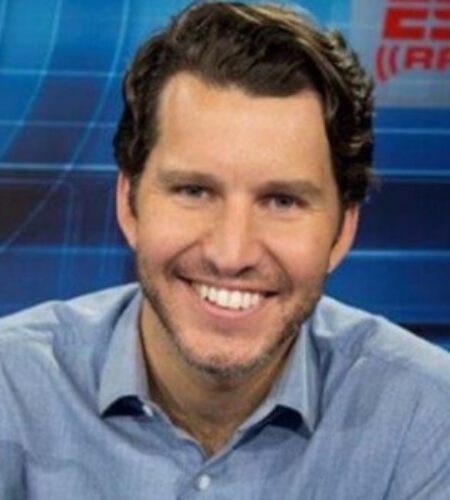 Will Cain is an American columnist, conservative political analyst, and sports commentator and a licensed attorney born on 28th March 1975 in U.S.
Will was born to Charles Larry Cain (father) and Rosalind Williams Cain Motley(mother). He also has a brother, Stephen Mathew Cain.
Will has two children Charlie and West. In 2015 on his Instagram page he posted a picture of his kid captioning that he was forcing them to grow up to be cowboys.
Will is married to Kathleen, they began dating while in college in California. In 2015 during an interview with ESPN FrontRow he said that the best thing he had ever accomplished in his life was marrying his wife.
He is the host of ‘The Will Cain Show’ on ESPN Radio and a co-host of ‘First Take’. He also broadcasts the ESPN News from 3-6 pm ET.
Cain has served in many platforms as a contributor such as the National Review, ABC’s The View as a guest host and MSNBC’s ‘Way Too Early’.
He has also appeared on MSNBC’s Morning Joe, HBO’s Real Time with Bill Maher and on Fox News.
Will attended Pepperdine University in Malibu, California and later joined the University Of Texas School Of Law and is a licensed attorney in Texas.
Cain previously worked as a fill-in host for CNN's In the Arena, where he co-hosted the program with E.D. Hill from February 28, 2011 to August 5, 2011.
On March 11, 2019, Cain likened Antonio Brown's contract requests during Brown's trade to the Oakland Raiders as being "like a suicide bomber" while discussing the trade on First Take, causing some media backlash on multiple outlets.